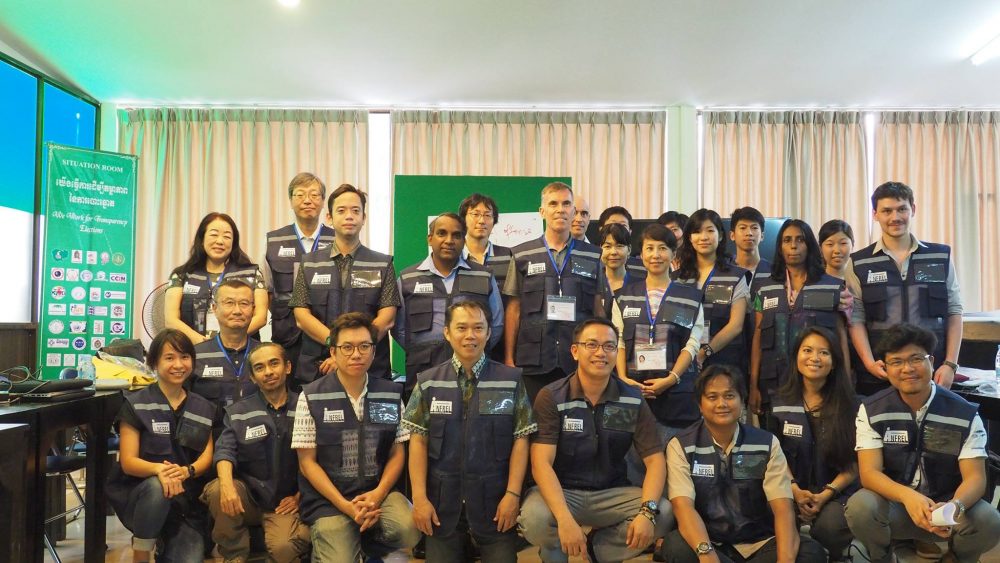 PRESS RELEASE: Launch of the ANFREL International Election Observation Mission to the Kingdom of Cambodia’s Commune and Sangkat Council Elections

Phnom Penh, May 30 – The Asian Network for Free Elections (ANFREL) launched on May 29 its international election observation mission to the Kingdom of Cambodia’s 2017 Commune and Sangkat Council Elections to be held on June 4. The delegation aims to engage with election stakeholders — political parties, civil society organizations, election management body, media and voters — to contribute to promote a peaceful electoral process, uphold universally recognized democratic principles and protect the sanctity of the ballot.

The international election observation mission is composed of fifteen (15) election observers and two (2) election analysts hailing from its network of election watchdogs all over Asia and beyond. It is led by ANFREL Secretary General and Head of Mission Mr. Rohana Hettiarachchie from Sri Lanka. Observers are to be deployed throughout Cambodia to better monitor the electoral campaign occurring until June 2 and the electoral operations of June 4.

These elections will be the first since the National Election Committee (NEC), Cambodia’s national election management body, was revamped in 2015. ANFREL hopes that the NEC will handle its duties with neutrality and efficiency. The Mission urges all stakeholders to abide by the codes of conduct released by the NEC, respect the will of the 7.8 million Cambodian registered on voter lists, and ensure a peaceful election free from intimidation and undue influence. The delegation takes pride in being a part of this political process and hopes the Cambodian voters will actively participate and let their voices be heard.

The mission will base its assessment from internationally recognized suffrage and human rights norms such as the United Nations’ International Covenant on Civil and Political Rights (ICCPR), and the Bangkok Declaration on Free and Fair Elections and the Dili Indicators developed and endorsed by Asian election monitoring organizations. ANFREL believes that multi-party systems are a core component of electoral democracy. In this regard, a level playing field, an inclusive process, as well as the respect for the human rights and democratic election principles should be secured to ensure the people’s right to free and fair elections. While every state is sovereign in paving its own path towards democratization, ANFREL believes there are universal suffrage rights that should be accepted and enforced through mutual cooperation among the different stakeholders in the society.

ANFREL supports domestic election monitors in cultivating a culture of vigilance and active political participation. The mission will work closely with key partner organizations in the country — the Committee for Free and Fair Elections in Cambodia (COMFREL), the Neutral and Impartial Committee for Free and Fair Election in Cambodia (NICFEC), and their network of human rights and election monitors.

Formed in November 1997, the ANFREL established itself as the preeminent NGO in Asia working on elections and is based in Bangkok, Thailand. Its main focus is in observing pre- and post-electoral processes, and developing and training civil society groups that are actively working on democratisation in their home countries. We also undertake specific research projects and advocate on good governance issues in Asia. Since its formation, ANFREL has covered 49 elections observation mission across Asia with over a thousand Asian election observers participating in these missions.

ANFREL wishes the people of Cambodia and the NEC a peaceful 2017 Commune and Sangkat Council Elections.